Home  /   /  PROF. DR. HARALD ROBERT BRUCH: I BELIEVE THE WORLD ECONOMY WILL RECOVER FROM THE COVID CRISIS IN TWO YEARS

PROF. DR. HARALD ROBERT BRUCH: I BELIEVE THE WORLD ECONOMY WILL RECOVER FROM THE COVID CRISIS IN TWO YEARS 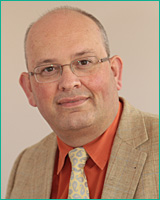 Prof. Dr. Harald Robert Bruch - leading lecturer of Infectious Diseases at the University of Seville, Spain and the University of Bonn, Germany and a renowned German hematologist and economist, delivered  a public lecture to students and faculty at Varna Free University "Chernorizets Hrabar" on  "Economic and Medical Aspects in the Light of the Spread of COVID 19 in Europe". The lecture was held with great interest in the virtual auditorium of the university. In a particularly attractive way, Prof. Bruch analyzed COVID 19 and its distribution in Bulgaria and Germany, not missing the comparison between the two countries. As a professor at the University of Seville, he also gave examples from Spain.

The professor explained what is important to know and how to protect ourselves from the disease that has caused an unprecedented global pandemic in our century.

"Bulgaria has a low number of deaths compared to Italy," said Prof. Bruch. "The problem is like an iceberg - if we don't test a lot, we won't know the number of cases and we won't know what the real mortality rate is."

Prof. Bruch cited the long-term forecast of Harvard Medical School according to which in the next 2 to 3 years up to 2/3 of the world's population will be infected. "There is no guarantee that the climate will be the only factor in improving the situation," he added.

According to the leading scientist, so far about 3% immunity has been built in society and it is not certain how much and for what period of time it would protect us. We can flatten the contagion curve through social distancing - that is, we will support the health and social system - the number of those infected will not exceed the capacity of the health care system.

The spread of the disease has a major impact on the economy. The global economic crisis has hit the whole world, the German scientist shared in his lecture. And the world is connected - it interacts and exists through import and export. Prof. Bruch gave the example of Germany, where in March exports fell by 8%, companies slowed down; people have no income if they have lost their jobs. The state has no money, companies have no money, the financial sector is in a bad situation.

It is very difficult to make forecasts, commented Prof. Bruch, but people hope that the crisis will end after the end of the summer and the economy will begin to recover quickly. The stock market collapsed during a pandemic. The gold market is rising. The recovery of the stock market can be expected only after the crisis is overcome.

States are taking various emergency measures. "In Germany, we have given money to companies to stabilise corporate liquidity, financial market liquidity and reduced taxes for companies, short-term employment measures have been introduced. The self-employed are financed - 9,000 euros each, and if a company has up to 50 employees, it receives 25,000 euros. This happened within a week, very atypical of a bureaucratic system. Even hospitals are protected by a hospital shield - they receive money when increasing the number of beds in intensive care units - 50,000 euros per bed and money for protective equipment, "said the professor.
According to him, there are three possible scenarios to get the global economy out of  the crisis with COVID:
He recalled the words of the Nobel laureate Joshua Lederberg, who said that our resourcefulness, our intelligence, would stand up to "their genes," meaning the virus under their genes. The epidemic of COVID 19 is an unprecedented threat to our health and economy, to politics, to people, to all of you, and it may last a long time, but if we use our intelligence and we all do, we have a chance to overcome it.