Home  /   /  The title Honorary Professor of VFU "Chernorizets Hrabar" was conferred on Prof. Alexey Gromiko, D.Sc. at a solemn ceremony

The title Honorary Professor of VFU "Chernorizets Hrabar" was conferred on Prof. Alexey Gromiko, D.Sc. at a solemn ceremony 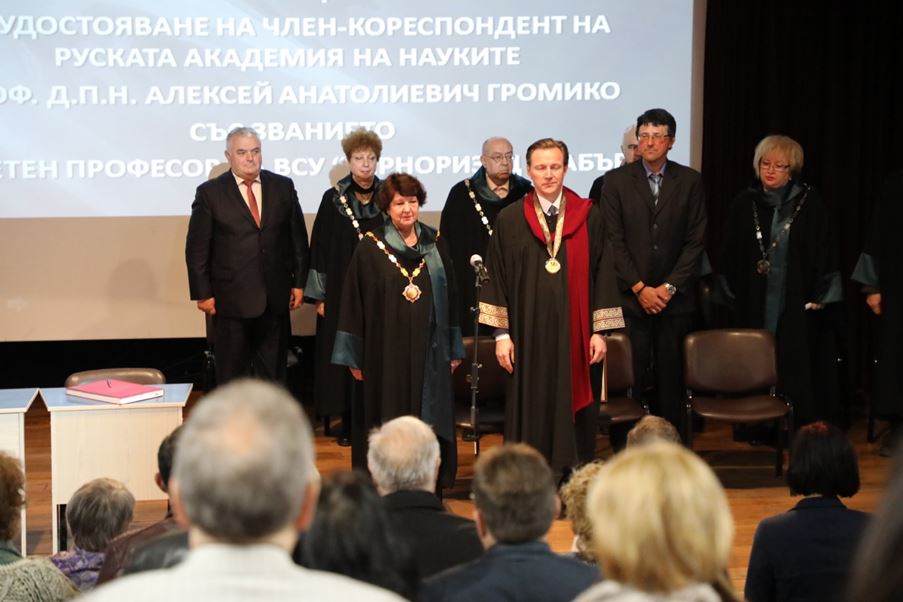 The Russian scientist is awarded with the title for his major scientific achievements in the research of the political systems, geopolitics, international relations and security and for an essential contribution to the development of the fruitful cooperation between VFU ""Chernorizets Hrabar", Russkiy Mir Foundation and the RAS Institute of Europe. 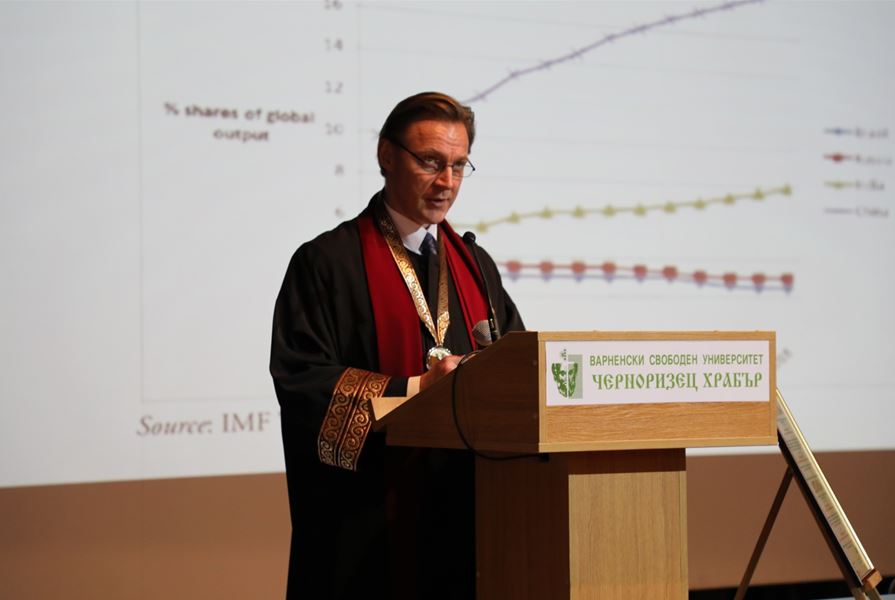 Within three days Prof. Gromiko held a lecture course and master class at VFU "Chernorizets Hrabar". The lecture course on International Relations and Security included a series of lectures on topical issues related to international politics and security and ended with a public lecture entitled "The Political Transformation of the Euro-Atlantic Area".

Prof. Gromiko spoke to the media that he briefly presented the trends, characteristics and changes in the development of the international relations in Europe and the world. "We live in great uncertainty, and we cannot say that for the next 10-20 years we will be able to find the right path on the basis of some myths of history that are often based on our decisions. We need to find concrete solutions useful to our countries."

After the public lecture of the new Honorary Professor of Varna Free University, the participants in the lecture course received certificates personally from Prof. Alexey Gromiko, D.Sc. and the Rector of VFU "Chernorizets Hrabar" Prof. Gercheva, D.Sc.

"I wished the students to shake off the myth that nothing depends on small countries. In history, important roles have always been played by individuals; there has not been a single stage in which outstanding personalities have not played a decisive role in changing the course of history. For the future development of the world we need to have a lot of knowledge and to develop it. When entering mature life, students must be ready with their knowledge and skills to cope with reality," Prof. Gromiko said.

He commented on the significant role of Bulgaria in the 19th and 20th centuries as a historical fact as well as the close ties between Bulgaria and Russia over the years and pointed out the responsibilities and obligations of our country as a member of NATO and the European Union. "Bulgaria can make such decisions that will allow a massive development in favor not only of Russia and Europe but of many other countries, which is also part of its important role in our time. Everything is in our hands and we have to try to make the most of the opportunities we have," Prof. Gromiko concluded.