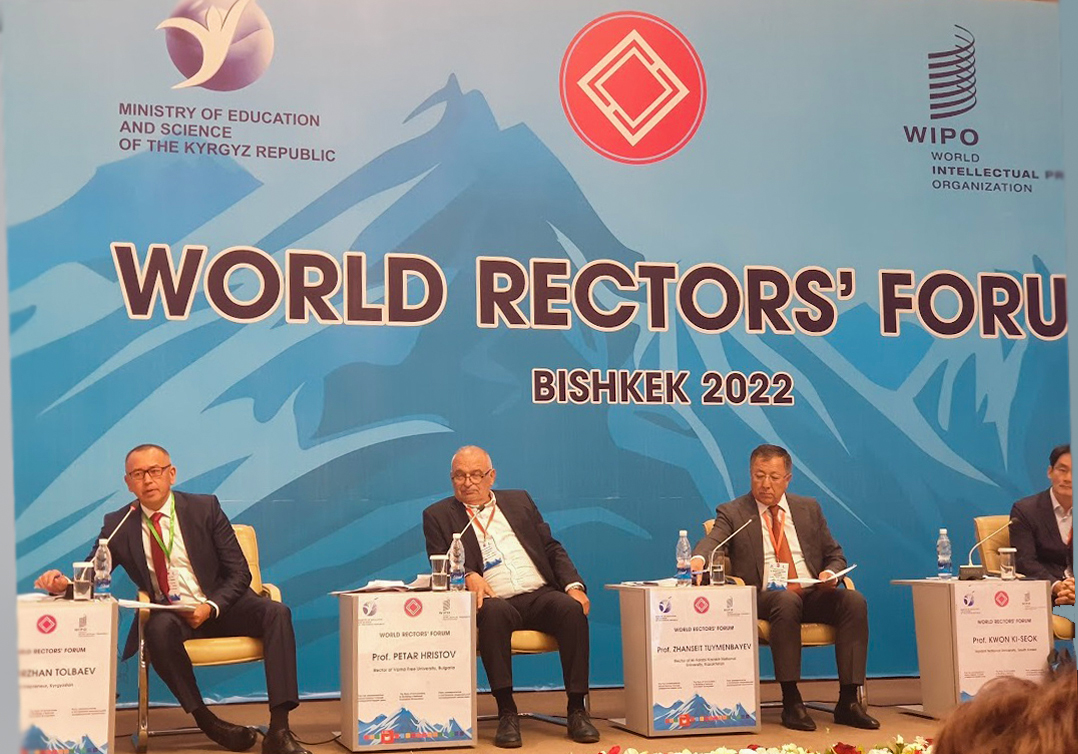 The First World Rectors’ Forum took place in Bishkek, the capital of Kyrgyzstan, on the topic "The role of universities in building a national innovation ecosystem". The event was organized by the Government of Kyrgyzstan, the World Intellectual Property Organization of the United Nations, with the support of the World Bank. The rectors of 100 universities from 80 countries from Europe, America, Australia, Asia and Africa were invited to participate in the forum, including the Central European University in Budapest, Kettering University in the USA, the University of Waterloo in Canada, the University of Applied Sciences in Merseburg, Germany, Brunel University of London, University of Genoa, Italy, etc.

Bulgaria was represented by the rector of VFU "Chernorizets Hrabar", Prof. Dr. Petar Hristov and the Dean of the Faculty of International Economics and Administration, Assoc. Prof. Dr. Eleonora Tankova. The invitation is the result of the successful partnership with the International University of Kyrgyzstan (IKU), which has declared Varna Free University as a reference, i.e. development model in educational and innovation activities. For the fourth consecutive year, Kyrgyz students are being trained in International Business at VFU "Chernorizets Hrabar".

Prof. Hristov participated in the panel Innovation Policy and Management with a report dedicated to the innovative policy of private universities in Bulgaria, as a source of competitive advantages in the national educational market.

The shared experience sparked interest, as a result of which contacts were established and cooperation agreements were signed with universities from Kyrgyzstan, Uzbekistan, Pakistan and Kenya.

Today, the socio-creative role of scientific knowledge based theoretically by Peter Drucker at the beginning of the century that is able to create a new society through changes in the nature of work is obvious. The role of university education is also indisputable, the purpose of which, according to Einstein, is to transform the "miracle" of science into something comprehensible. This role could not be fulfilled successfully if the universities themselves did not become generators of innovation in their own research and teaching activities. The direction set by Peter Drucker was confirmed by UNESCO - for the successful functioning of society in the conditions of "society of knowledge" where the most important thing is "learning to learn".

A favourable factor for Bulgaria's reorientation turned out to be the restoration of private higher education in the early 1990s. Official statistics for 2001 indicate that in just one decade, private higher education institutions attracted nearly a quarter of the students in Bulgaria. During this period, only the founders of private universities could afford to invest in the construction of new academic buildings, auditoriums, libraries and laboratories.

Now, from the distance of time, it can be seen that the main reason for what happened was the return, along with private higher education, of real academic freedom. And in the previous period, the words rector, dean, department, lecture, colloquium, as well as the wearing of togas and hats on solemn occasions were symbols of academicism, but this was more of a formal adherence to tradition. The newly emerged private universities spontaneously fulfilled the form with its original content - independent establishment of university majors, free admission of students, independence of the lecturer in teaching their subject, election of the governing bodies only by the professors and students.

More importantly, authentic academic freedom allowed private universities to restore higher education to its original purpose – to teach a person to use their abilities to achieve freely chosen goals. Before the democratic changes, most of the students were put in a situation to choose from a list of majors proposed by the state. In practice, it turned out that a person defines his/her own goal, but by choosing from a list compiled by someone else. In this way, the individual was "inserted" into an algorithm predetermined for the needs of the social system, not into a role chosen by him/her.
Private universities offered "liberal education" - in the sense that students themselves could choose what to study, avoiding bureaucratic coercion. Thus, private universities received the competitive advantage of offering the student not a goal, but providing the means to achieve the goal chosen by individuals. In itself, "liberal education" proved to be a revolutionary innovation.

This policy has put private higher education in serious trouble, and in the period 2009-2020 it lost 56% of its students. To deal with the situation, we continued along the already chosen path of "liberal education" in three relatively distinct directions:

- by revealing modern majors necessary for the business, which are unique to the country. Here we have accumulated experience and know-how - for the first time in Bulgaria, our university opened a number of majors that were later "copied" by other universities, such as national security protection, forensics, customs and financial intelligence, disaster and accident protection, circular economy, international law and security, fire and emergency safety, design for the architectural environment, etc.

- in classical majors – law, economics, architecture, etc. we expanded the possibility of free choice for students by introducing in the first year a block of general university elective disciplines such as security law, personal finance, theory of proof, academic communication, etc., and in the second year – a similar block of general faculty disciplines. Thus, after the first year, students can easily adjust their choice of major within the university, and after the second year - within the faculty
- entering the global educational market by sharing resources with partner universities from other countries. We use the experience gained over the last fifteen years of jointly created new bachelor's and master's degree programmes and postgraduate courses with universities from Norway, Turkey, Cyprus, Ukraine, Serbia, Kazakhstan, China and Israel. We were the first in Bulgaria to successfully implement educational franchising in another country. Together with a Cypriot college, we implemented a project within the framework of which over 300 Cypriot policemen and firefighters were awarded bachelor's and master's degrees.

One of the goals of our participation in this authoritative world forum is to declare our readiness both to offer and share good practices, and to seek and gain access to innovative foreign educational products to realize jointly on the basis of a mutually beneficial partnership.